Charlie May, lives in Ellijay, GA. he has two children, one son and a daughter. Charlie has also been blessed with two Grandsons and one Granddaughter that light up his world.

Charlie’s work background goes from a cotton mill to being a garbage man. He has also worked construction up and down the east coast and has even drove trucks. He was also in law enforcement for five years, sold insurance and has ran a cattle farm. While Charlie was on the police department he organized the junior police department. In the 1980’s he worked with a group called, Save a Youth. Charlie is a man of many talents but his greatest gift is his music, songwriting and even the books he has written.

For almost twenty years Charlie has had the privilege of writing, and singing gospel music. It’s a talent that the Lord gave him after taking on the responsibility on leading the choir in a church he was attending. For years people have heard him say many times “I never dreamed this big”. What a journey, from that small church in Dalton Georgia, to singing in churches that were built in the 1700’s in upstate New York, then to the Cowboy camps in Texas, and on to recording 4 albums.

Charlie has had the honor of traveling with some great friends and meeting many wonderful people over the years. One thing that still amazes him; 15 years traveling all over the country is that he say’s he doesn’t have any bad stories. He couldn’t have been treated any better than he was; people were good to Charlie everywhere he went. He has met people that changed his life; people that he knew loved him.

Then in 2010 Charlie got to where he couldn’t talk and after almost a year of talking antibiotics and other med’s they sent him to a throat specialist. The doctors found growths on his vocal cords and had to have surgery. Soon after Charlie went back for a checkup and they found rheumatoid nodules on his vocal cords. Charlie was devastated.

Since that time Charlie has written a children’s book called “Dooley the Rooster, Pigs can’t Dance.” He also has a new book out called “The Music Note” It’s Charlie’s personal testimony.

It’s been a long time since Charlie has been out singing, but feels like it’s time to saddle back up and get back out there.

A quote from Charlie, “The Pleasure is mine but the Glory goes to God” 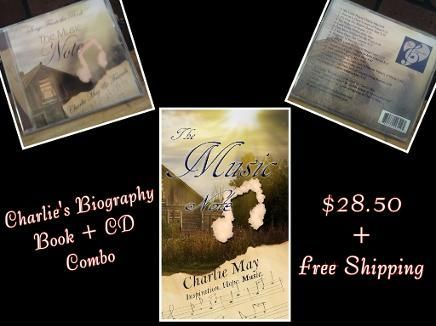