Pastor Sherry Olympia Weathersby is the 1st born child of Bishop Boston Ford Jr., and Evang. Willa Mae Ford!
Along with her sister Evang., Serena Ford and their Brother Pastor Marcus David Ford, in their youth
there were known throughout Delaware for their musical and speaking gifts!
She gives tribute highly to her parents because it was thru them that she was taught about Jesus Christ!
Although born in Chester, Pennsylvania, she grew up in the city of Wilmington, Delaware and graduated form De La Warr High  School in June 1974.
In 1981 she met and married Pastor Donald V Scales, Sr.,  and moved to Columbus, Ohio, and was there for 34 year, and was given to much study and concencration  for the first 4 years of marriage in the word of God. And for four more years she entered into a Bible Education Program Iwhich was under the tutelage by the Holy Spirit thru Pastor Donald V Scales, who held a Doctorate of Divinity Degree. In 1985 she heard the call from God to teach and preach Gods Word, Isaiah 61:3, and in 1986 accepted the call to ministry, and went on to be ordained by the Spirit of God thru Pastor Donald V Scales, Sr., to the office of Evangelist, and also served as co-pastored with him for 29 yrs., up until Donald transitioning to glory on 5/22/2010.
While in Man In Christ, Sherry served as co-ordinator of the women’s ministry called, 20th Century Women of the Gospel. This ministry was designed to help, support and promote women in ministry, and those who weren’t. It served to help them know who they were in Christ and to know and enquire of their purpose on earth thru Him, and also to know Him for themselves, and that they had a special God-ordained plan for their lives. We serviced the community with free clothing, food, school supplies on various occasions thruout the years. Sherry served as one of the teachers of the “Advancement and Enhancement classes taught weekly and instituted 60 spiritual warfare teachings given and taught by the inspiration of the Holy Ghost. Sherry also lead by God the “Prophetic Intercessory Prayer for over 20 years. Sherry served on the board of Trustees and was a member of an organized Womens Ministry in the city of Columbus, Ohio that gave support to pastors and their wives.
And upon her being installed and ordained, by God thru Bishop John and Overseer Lynda Smith of Christ Centered Apostolic Church, Columbus, Ohio, where she pastored 4 years Sound the Alarm Ministries, spoken to her by God thru much prayer and it was birthed in August 14, 2011.
On January 31, 2014, Sherry relocated by the will of God to Wilmington, Delaware where her parents reside, and where they Pastor their church, OutReach Holy Word Christian Church for 35 years. God made it known to her that she went back on the word  “Assignment” of the Lord.
On May 31st, 2014, after a 17 month relationship ordained by God, she married the HONORABLE, ESTEEMED, ILLUSTRIOUS, ARTHUR LEE WEATHERSBY, whom I call my “Gentle Gem” highly blessed, called, and appointed and anointed by God, and a very very caring and compassionate Man of God, who is a prolific teacher and preacher of the Word of God. Sherry has two children Sean and Stephanie ( Ram), long with their families, and six grandchildren. And together with Pastor Arthur who is their covenant father and pop pop, who loves them dearly. We love pray and cherish them, and are so very proud of them, and  both son and daughter  are doing well in life and ministry. To God be the Glory!! We’re not Blended, WE Are Family!!
Pastor Arthur Lee Weathersby and I now Pastor under God Sound The Alarm Ministries Joel 2:1, where we are Cry Loud and Sparing Not, Isaiah 58:1, and our other motto is, “If we can’t help you, we won’t hurt or harm you”.
In conclusion, Pastor/Evangelist Sherry O Weathersby states, “I have a charge from the Lord to live, teach and preach the uncompromising, unadulterated Word of God.
He is number 1 in my life. And all that I am and ever hope to be, I OWE IT ALL TO HIM!  TO GOD BE ALL THE GLORY, FOR ALL THE WONDERFUL THINGS HE HAS DONE.
I’M HEAVENBOUND!!!! 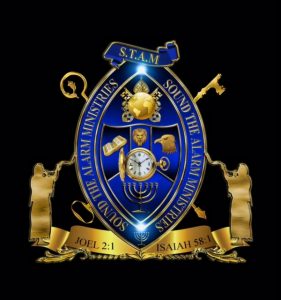